I Didn't Kill Him

I just realized a new, deeper level of understanding of my anger towards my family, and it has shaken me up.

I am the black sheep, the exchristian. ALL the other family members are still fundamentalist believers - my parents and five siblings, with two doing missionary work. In general they are cold and disapproving towards me and leave me out of key family events. Often it is passed off as an oversight, but to me the passive aggressive treatment is so obvious. Weddings, a 90th birthday, a funeral, holidays, and other occasions planned without my participation, considering my schedule, or even inviting me at times. 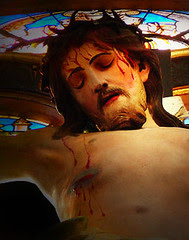 My missionary sister was sick for a year before anyone told me about it. The reasoning for that wasn’t hard to figure out. But I was angry and it hurt; after all, she was still my sister and I would have bitten my tongue about why she wasn’t granted a miracle.

My nieces and nephews are all growing up now and I’ve missed out on the pleasure of being an aunt. They have been mostly home-schooled and sent to Bible colleges. Their parents don’t approve of me, my work, my politics, my divorce, my language, my “lifestyle” (sex, drugs, rock ‘n roll?). But mainly, it’s my apostate status that marks me, which in their view, means I knew Christ and rejected him. This is much worse than just “backsliding.” It means I crucified Christ a second time. They know I was once a sincere believer.

This is the crux of what has dawned on me. They have denied me my grief and taken it one step further.

Once upon a time, I was the most serious Christian in the family. Our parents were “nondenominational” fundamentalist ministers. All of us kids were raised “Christian,” obediently going to church and learning the Bible. But I was the one who became intensely religious. In addition to our more conservative church, I joined a pentecostal group, spoke in tongues, studied all things theological, fasted weekly, and talked a lot about my love for Jesus. My uncle declared that I was the only “real Christian” in the family.

When we moved to Southern California, I continued my passion, now involving a lot of time with other young people evangelizing. This was for about five years during my adolescence. I was a virgin, bursting with hormones, and not immune to normal longings.

Looking back, knowing what I now know about human emotional cathexis and biological imprinting, I realize that JESUS WAS MY FIRST LOVER. He was the first man I truly loved. I never imagined having sex with him but the emotional intimacy was real. Ecstasy in love and ecstasy in religious experience are both delicious flights of imagination, and I have always had a lively imagination.

So, at age 16, I was deeply in love with someone who would always be mine, would always listen, would always take care of me, and would take me someday to his mansion to love me forever. My purpose in life was simple and clear – serve him until that day. Of all the fairy tale imagery in the Bible, my favorite was the Marriage Supper of the Lamb. I was happy and I sang to myself as I looked at the clouds – often in tongues, sometimes with words. One song included references to a lover in the Song of Solomon.

So to have my faith crumble was no small thing. It came apart for reasons intellectual, moral, and emotional. It took time and I resisted. In fact, I hung on, fighting back with apologetics, and evangelizing more. But I was anything but dishonest. My faith had to be true; God had to be the Rock of Ages, solid and real.

But with life experience and jarring new information, I had to come to terms with the cracks in my closed worldview. I could see that I wanted Jesus to be my hero, my savior. It was painful but now I craved authenticity. I needed integrity, and for that, my life had to change.

That meant letting go of my Jesus! As my new reality became clearer, Jesus slowly faded away into the distance. I had to break up a relationship that was not good for me, even though it had been such a sweet illusion. Looking back, I could see that it was just not working out. I was never good enough, and much as I wished it so, Jesus had not come through with his promises. I was exhausted and it was over.

Emotionally, my first lover died. And I grieved, deeply and privately. I wrote poetry, and I made art. Sometimes I raged, but I had no idea what to do with my feelings. I could never turn to my family.

It was long after my affair with him that my siblings became enamored with Jesus. I don’t think they remembered much about my relationship with him and I didn’t speak of it, so ever since then, it seems they don’t realize how in love I was, or what my loss was like.

Instead, they act as if I KILLED HIM. After all, this is what the scripture says about apostasy. My sister goes on all the time about Jesus. My younger brother writes books about Jesus in other countries, and he would not remember my days of zeal and devotion.

What crazy, mixed-up feelings I’ve gone through with them. It makes more sense to me now as I think, What If I lost a dear husband and my family only accused me of killing him? I would not only feel unsupported; my anger would be understandable. Or, what if they wouldn’t let me mourn because they thought I chased him away and he was still alive?

Of course, having been in their shoes, I understand their loyalty to this imagined being called “Jesus” that gives meaning to their lives. Especially with my father, who is 85, I wouldn’t want to take away that comfort. But I also want to scream when I feel the hostility, “No, I did not kill Jesus! I LOVED HIM MORE THAN YOU EVER WILL.” I did not turn my back on him, cheat, or leave him.

Don’t you know I wince when I hear the music? The love songs that come right back if I hear just one bar? I used to play them on the piano, for God’s sake. How do you think I feel when I hear ‘What a Friend,’ ‘Amazing Grace,’ ‘How Great Thou Art,’ or this?

‘There's within my heart a melody,
Jesus whispers sweet and low,
Fear not, I am with thee, peace, be still. . .’

Or this one, which can touch a nerve and make me cry:

‘I come to the garden alone
While the dew is still on the roses
And the voice I hear, falling on my ear
The Son of God discloses,
And He walks with me and He talks with me
And He tells me I am His own;
And the joy we share as we tarry there,
None other has ever known.’

Could that be any more personal? Hearing it is like being in a night club somewhere and having “our song” come on. Yes, the heart strings are fiercely plucked. It’s not rational; I have to compose myself and come back to reality.

My family members have never accused me of not ever knowing him, although in-laws have tried to shame me and say I left the faith because I wanted a life of sin. It was beneath me to answer that and my siblings were embarrassed. But my having truly “tasted the heavenly gift,” according to Hebrews 6:4-6, makes my falling away so much worse. It is so serious that repentance and restoration to the faith is impossible. According to that passage, I have “crucified again the Son of God and put Him to open shame.”

But I reject this about myself. I never did anything to Jesus. My mother once said, “What did Jesus do to you to deserve this?” I was taken aback and also startled because I no longer thought of him as real.

In my own experience I have discovered that Christians seem to think they need to defend God constantly. Mere words can create anguish if they are deemed blasphemy, so I try to watch my language. I also try to be a loving, generous family member myself. But nothing I do will ever be enough and I cannot change the way my family sees me.

What I can do is honor my own history. And that is: I had my adolescent faux love affair with Jesus, my Prince Charming, and it was lovely. So was Santa Claus (although not so sexy). I didn’t kill either of them; I’m quite sure of it.