Why I Can No Longer Be Christian

The story of Christianity in a nutshell: 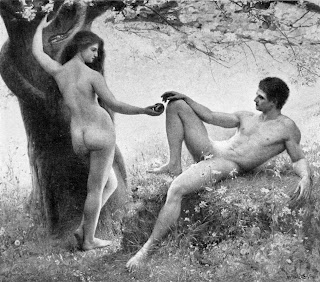 God decides to create something. That something happens to be our world, our reality, and everything humanity will ever know and become. These things are all set in motion by God in the beginning. How does he do this, you ask? Well, he speaks the whole planet, the stars, and everything else into existence, in six literal days. Yes. Six days. And then he rests on the seventh. Not be cause he has to, mind you (he is all-powerful, remember?), but because he wants to.

God has created a single male human. His name is Adam. Adam dwells naked in the Garden of Eden: a sinless, perfect place. God presents all the animals to Adam for him to name. So he names all of them. But something wasn’t right (that’s strange, considering Eden was supposedly perfect). So God creates a woman for Adam. Go figure.

God placed in the middle of the Garden a tree, called The Tree of the Knowledge of Good and Evil. Adam and Eve could eat from any of the other trees but this one. God told them that if they ate from this one tree, they would surely die. As implied, eating from the tree would give them the knowledge of good and evil. So they did not yet know what evil was. Keep that one in mind.

So Adam and Eve dwell naked together in the Garden, which is a perfect, and sinless place. But up in heaven, something not-so-awesome is going on. Lucifer, the archangel of heaven, rebels against God, and so our loving deity casts Lucifer and 1/3 of the angels of heaven down to earth. Lucifer is renamed Satan, and becomes the main antagonist of the Bible.

One day, Eve is in the Garden, and a talking serpent (who is presumed to be Satan) tempts her to eat from the Tree, although she knew that God had told them not to. The serpent tells Eve that they will not surely die, but that their eyes will be opened, and that they will become like gods. So Eve listens to the serpent, and eats from the tree. This is supposedly sin entered into the world. She also gets Adam to eat from the tree. Now everyone is fucked.

But wait a second…how could Eve have sinned if she didn’t know what evil was? Eve wouldn’t have known that what she was doing was wrong.

So, long story short, God gets really, really mad. Like, really mad. Turns out that sin doesn’t just affect Adam and Eve; it’s going to affect all of their children, and their children’s children. And since God wants them to populate the world through incest, there’s absolutely no way around this big disaster (even though God is all-powerful). So Adam and Eve die both spiritually (their souls will be forever separated from God, for all of eternity) and begin to die physically (I’m assuming through the process of aging). So everything is Adam and Eve’s fault. Oh, and because of sin, man will have to actually work to grow food. And women will become the lesser sex, and have to go through pain while delivering children. That’s nice.

But wait, God is all-powerful and all-knowing! He knew this was going to happen, so isn’t it his fault?

So anyways, now that all this shit has gone down, the earth gets populated through good ol’ incest, just like God wanted. But after a while, God saw that everyone, and I mean everyone, was wicked except for Noah and his family. So God, in his infinite wisdom and justice, decides to kill everyone on the planet except for Noah and Noah’s family. You guys probably know the story of Noah’s Ark, so I’m gonna hurry through this one. He sends rain down for the first time EVAR, and Noah, his family, and all the necessary animals are inside the ark. Oh and it has only one window.

So it rains for forty days and forty nights, and the entire earth is covered in water. I mean there is no visible land. At all. That’s right, the entire earth was flooded to the very top of the highest mountain. A very large amount of people died, including innocent children and babies. God does this because he regrets ever making humans.

(How could an omnipotent God regret anything? He knew exactly what would happen. Also, God sounds like a cruel asshole.)

And guess who gets to repopulate the earth through incest? So that’s what happens. And then along comes Abram (later named Abraham), then Isaac, and Jacob and the rest. I think afterward Moses comes along (I get confused on the order of the patriarchs and all that jazz).

I bet a lot of you know the story of Moses. Well, supposedly (against all modern archaeological evidence) the Jews were enslaved by the Egyptians. God chooses Moses to speak on his behalf to Pharaoh (the story of the burning bush).

But God purposefully hardens the heart of Pharaoh so that he would not let the Jews go free. Then he punishes Pharaoh and all of Egypt by killing every firstborn male. These were innocent people who had done nothing wrong and were not even a part of this whole fiasco, until God decided to bring them into it.

Many other plagues come along, which include total darkness and the Nile River being turned into blood. Finally, Pharaoh agrees to allow the Jews to go, and you all know the story of the parting of the Red Sea. Well, God allows Pharaoh’s army to drown to death, by having the water close up on them as they are pursuing the Jews. By the way, wasn’t the Egyptian army just doing what they were told to?

But wait…I thought humans had free will. Doesn’t God’s manipulation of Pharaoh’s heart go against that?

So, a lot of shit happens in the Old Testament. God makes his covenant with Israel. His laws and rules (as listed in Exodus, Leviticus, Numbers, and Deuteronomy) include, but are not limited to:


Anyways, there is a lot of genocide, implied rape, straight-up rape, animal sacrifices, misogyny, homophobia, killing of children, slavery, and just a lot of hate and violence in general. Most of this is incited by the Almighty himself. And if you ask a Christian why God did all of this, the only answer they can think of is “we cannot know the mind of God.” Or something like that.

(Admit it, it’s all pretty suspicious and it kind of seems like a bunch of misogynist, homophobic, violent men wrote the Bible.)

Note: The OT promises a Messiah. We’re getting to that.

There are four Gospels included in the New Testament. These are Matthew, Mark, Luke, and John. They all pretty much tell the same story (except for the fact that some of them exclude parts and some of them contradict each other on the details) of the life of Jesus Christ, who is the promised Messiah (told ya).

So Jesus is the sinless Son of God, who is half-man, half-God. But fully both, somehow. He has come to save mankind from their sins, and not to set up an earthly kingdom quite yet (as opposed to what the Jews had assumed for many years).

So Jesus is crucified, buried, and rises from the dead on the third day. He stays here on earth for an additional forty days, and then ascends to heaven. And this is where the central belief of Christianity comes in.

In order to go to heaven, you must “accept Jesus Christ as your personal saviour.”

This is what almost every Protestant denomination agrees on. But they cannot agree on if your salvation is “once saved, always saved”, or if you must keep it up by performing good works, OR if you must keep yourself saved and in God’s favor by NOT doing bad things. Many believe that baptism is required, others believe that it is just something you SHOULD do, but that it is not required to go to heaven.

The Bible is very confusing on this. No wonder denominations can never agree.

(Wait…couldn’t God have written the Bible in a more concise, clear manner so that everyone would know and understand the requirements for salvation?)

The rest of the New Testament is the the Acts of the Apostles, letters written to people/churches, and finally, Book of Revelation, which is terrifying.

The main story of the Bible is this:

God created man, knowing that they would soon come to have a “sin nature”. Our “sin nature” is wrong, and causes us to naturally be predisposed to sin and do evil.

God created hell (originally supposedly for the devil and his angels), and made the punishment for sin not only physical death, but a spiritual death in which sinners burn forever and ever. This is eternal punishment for finite sin.

God sends himself down to earth in the form of Jesus Christ, to die as a blood sacrifice to appease himself, so that he can accept his own offering for sin instead of allowing his creation to burn forever. God has always required blood sacrifice from the very beginning. So nothing new here.

Jesus died for everyone’s sins, but however, that doesn’t mean everyone goes to heaven. You must “accept” his gift of salvation. This makes little sense, because if he already died for everyone’s sins, we should all be covered, right? Nope. And don’t even get me started on what being “saved” even means. Like I said before, everyone debates on the requirements for salvation. And this is cruel, because God knows good and well that not everyone will become saved. Religion is mostly geographical, and God knows this.

God creates people that he knows will go to hell. And yet, in the Bible, he states that he does not want anyone to go to hell. Oh wait, but in another verse he says that the wicked are created for the day of evil. Sounds like a huge problem there.

The Bible is full of hate, violence, and every imaginable evil you could think of. And this all comes from a god that literally billions of people worship. Personally, I cannot ascribe to this religion any longer. I still believe that there is something out there; I believe that spirituality is very real and is a very good and positive thing. However, I can no longer believe in the Abrahamic God, who is a cruel, genocidal, misogynistic, homophobic, racist, violent, hateful, and, in my opinion, truly evil deity.