What Christianity and Kink Have in Common Want a special someone who will bring you to your knees? One who will be totally in charge? One who will tell you that you are really, really bad and threaten you with punishments? Maybe you have a little day dream about being a captive virgin. Or maybe you prefer to fantasize about a man who is helpless, who, say, has his arms secured to a crossbeam. Christianity has something for everyone.

I’m not the first person to observe that religious and sexual ecstasy have a lot in common—or that the love songs Christians croon to Jesus sound remarkably like other love songs. Nor am I the first to point out that Christian ministers, musicians, and recruiters play with this blurry boundary deliberately. Tim Tebow posing as sexy Jesus-on-the-cross for GQ kind of says it all. As if there weren’t enough Christian girls and boys struggling with Jesus fantasies already. (here, here, here)

Early pagan religions incorporated sexuality explicitly into religious practice, for example, in the form of temple prostitutes or fertility rites or sacred sexuality. Some Dharmic traditions, like tantric Buddhism, continue to do so today. Given the power of religion to arouse and exploit sexual energy, it should come as no surprise that sacred sexuality takes a wide variety of forms—or that, despite an overt attempt by the Abrahamic traditions to constrain and control sexuality, these traditions also make use of the very same urges they seek to suppress. 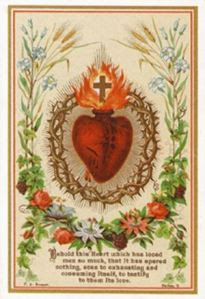 But just beneath the surface both communities may be leveraging a similar set of human instincts and emotions. I am not suggesting that Christianity is all about sexual arousal, even sublimated or redirected sexual arousal, though that most certainly is a part of the picture. I am suggesting that kink and Christianity appear to tap an overlapping array of social and psychological impulses that include sexual arousal, moral emotions like shame and disgust, our tendency to seek hierarchy, our desire to escape rationality, our heightened sensory acuity in the presence of emotional arousal, and our tendency to take every pleasure to its extreme. In all of these, the themes of dominance and submission, inflicting pain, and receiving pain, have parts to play.

Pleasure and Pain: In the past five hundred years, few Christian writers have described the relationship between pain and pleasure as graphically as St. Teresa of Avila, whose sixteenth century vision of mystical union with God drips with sexuality: 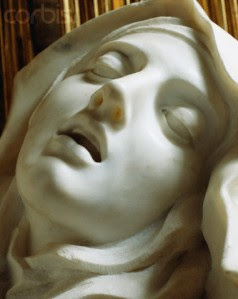 In his hands I saw a long golden spear and at the end of the iron tip I seemed to see a point of fire. With this he seemed to pierce my heart several times so that it penetrated to my entrails. When he drew it out, I thought he was drawing them out with it and he left me completely afire with a great love for God. The pain was so sharp that it made me utter several moans; and so excessive was the sweetness caused me by the intense pain that one can never wish to lose it, nor will one's soul be content with anything less than God.

Still today, in some Christian traditions, pain and religious passion go hand in hand. Mother Theresa is quoted as saying that love isn’t real unless it hurts. In one anecdote, she tells a suffering woman that her pain is the kiss of Jesus. The nuns of Mother Teresa’s order, the Missionaries of Charity, have practiced self-mortification techniques including striking their legs with rope and wearing a spiked chain called a cilice. Dan Brown’s thriller, The DaVinci Code was a wild fantasy, but the mortification practices of the order Opus Dei are real.

The Bible’s naughty bits have been staples for generations of teenage boys stuck in church.With or without the erotic overtones, pain appears to heighten some spiritual experiences through several mechanisms. Self-inflicted pain or voluntary submission to pain can be proof of commitment, as in gang initiations. It may offer relief from guilt or anxiety or self-loathing, like self-cutting does for many depressed girls. It may produce an endorphin release as when runners and rowers push past a pain threshold. It may intensify focus on the present moment by causing distractions to recede into the background, like pinching oneself can do. It may offer a mesmerizing rhythm of sensation, as in head banging. The point isn’t that Christian penance and self-mortification are always or even usually erotic—they aren’t—but that both Christianity and kink can use pain as sensory enhancers. 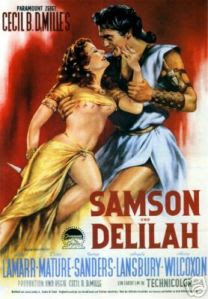 Bondage and slavery: The Bible has its share of stories about master-slave relations and other funky sex—starting with Adam who sleeps with his female clone; and Abraham who has sex with his half-sister/ wife Sarah as well as her slave; and Lot’s daughters, who after being offered to a rabbling mob get their father drunk so they can conceive by him. Then there’s the temptress, Delilah, who ties Samson up and finally saps his strength by cutting of his hair after their time together; and we can’t forget Solomon with his 700 wives and 300 concubines or sex slaves. (It wasn’t violence alone that got the Bible reviewed by Hong Kong’s media regulators.) Some people were shocked by all of the humping in Robert Crumb’s illustrated version of Genesis, but the Bible’s naughty bits have been staples for generations of teenage boys stuck in church.

Of course a key difference between these stories and modern sexuality is that dominance in kink is dictated by preference rather than gender. Also, both ethics and law dictate that BDSM actions require the enthusiastic consent of both parties, which definitely is not the case in the Bible stories. Fortunately most scholars think of the Bible stories as either mythologized history or historicized mythology rather than a factual record of events. Also fortunately, (as Greta Christina pointed out in the introduction to her kinky novella, Bending) most people who enjoy fictional violence or coercion—murder mysteries, spy novels, rape fantasies, or sexual slavery—would not seek or enjoy the same experiences in real life. 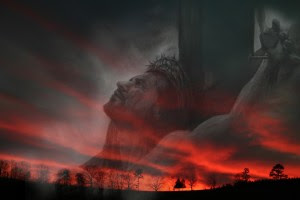 When it comes to bondage, perhaps the most common stimulus in the Christian tradition is the crucifixion itself, with its glorified, beatific images of Jesus hanging and swooning, eyes half lidded. The crucified Jesus is almost never depicted as a short, ordinary looking Semite. Instead, whether Caucasian, Middle Eastern, or Black, he is usually lanky and well-muscled with perfect skin and a face that fits some artist’s version of male beauty. Small wonder Tim Tebow slipped so easily into the pose. 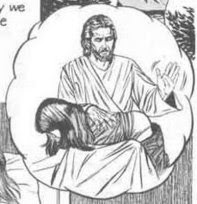 Discipline: Articles and forums devoted to “Christian domestic discipline” couch the practice in spiritual or religious terms: Wife spanking, like child spanking, is a means of maintaining the hierarchy that God established, with a man on top and wife as his “helpmeet.” Proponents are careful to distinguish their approach from secular kink, which they disparage. They establish a proper biblical context with texts like this one from the book of Hebrews: “Now no chastening for the present seemeth to be joyous, but grievous: nevertheless afterward it yieldeth the peaceable fruit of righteousness unto them which are exercised thereby.” Domestic discipline is described as a means to fend off, “this unholy culture, with its radically selfish feminism, and wholesale bias against true manhood, [which] launches relentless attacks against traditional Christian family values,” and it is recommended for serious offenses such as “the four D’s” (Disobedience, Disrespect, Dishonesty or Dangerous behavior).

Pious protestations aside, Christian wife spanking is clearly erotic. If it were not, why is it practiced in the bedroom, on a woman’s bare bottom? Why not have the preacher do the spanking? In fact, why not have the preacher spank men when they are bad? Of course, penance or punishment need not be routinely sexual. Punishing or being punished may have its own satisfactions, for example, as a way of wiping the slate clean or asserting hierarchy. Punishment also can be simply a form of abuse or self-abuse. As we know, moral emotions like shame, guilt and righteous indignation can be channeled in many directions toward many ends. 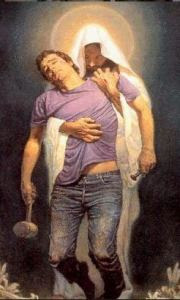 While few Christian couples own gags or restraints, a great many believe that God ordained a hierarchical relationship between women and men, and that this extends to the marriage bed. Women, in this view, were made from Adam’s rib and caused sin to enter the world, and so should not be allowed positions of authority in the church or home. In the words of the New Testament, “It is shameful for a woman to speak in church. Wives should regard their husbands as they regard the Lord. Women are not permitted to speak, but should be subordinate” (I Corinthians 14:33-35). This theology of “male headship” teaches that a woman’s greatest glory lies in bearing children and serving her husband. Protestant reformer Martin Luther put it bluntly: “If a woman dies from childbearing, it matters not; she is there to do it.” 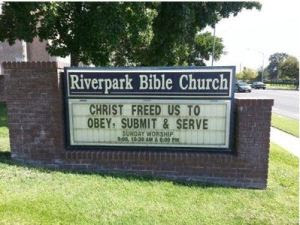 Either way, because humans are hierarchical social animals, dominance and submission may produce their own feelings of gratification. We’ve all heard that Islam means submission, literally. But submission is a pervasive theme in the Christian Bible as well. Children submit to their parents; women submit to men; slaves submit to their masters; and men submit to God, who, in many passages, is modeled on a Near-Eastern warlord. For modern born-again believers, conversion is often experienced as sweet surrender to the irresistible Divine will. In each of these asymmetric relationships, the person on the bottom gets excused from certain responsibilities, while person on the top gets power and authority. As observation of non-human primates suggests, there are privileges and obligations of each role in a hierarchy, whether dominant or subordinate.

Bible believers often claim that they are a moral beacon to the world, a “light shining on a hill.” In particular many look with disgust on the curious, open sexuality of modern society. A closer look might suggest that their claims of superiority are unwarranted, that—just like the rest of us—they are complicated creatures whose spiritual and sexual practices are driven by an array of motives and instincts. Do Christian teachings and practice simply draw on the same aspects of human psychology and physiology as kink or do they actually lay groundwork for BDSM sexuality? I know of no research that attempts to tease this apart. But given the overlap, maybe someone should find out.

Jesus loves Me. He Can’t have a wife!

Captive Virgins, Polygamy, Sex Slaves: What Marriage Would Look Like if We Actually Followed the Bible

What the Bible Says About Rape and Rape Babies

Valerie Tarico is a psychologist and writer in Seattle, Washington. She is the author of Trusting Doubt: A Former Evangelical Looks at Old Beliefs in a New Light and Deas and Other Imaginings, and the founder of www.WisdomCommons.org. Her articles can be found at Awaypoint.Wordpress.com.