The claims concerning the death and resurrection of Jesus Christ in the following scene were all taken directly from the Gospels. Had the Christians’ claims regarding the resurrection been investigated by the Romans a few years or decades after the alleged incident, it might have gone down much like the following. 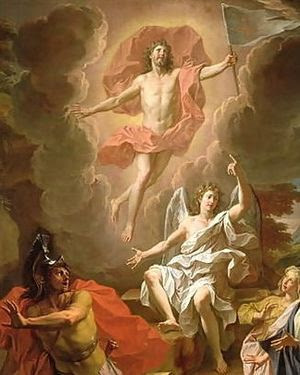 Image via Wikipedia
Chief Detective: “Look, here we go again. There's another cult in need of investigation. It seems we aren't through with the troubles that a certain Jesus caused, even after he's been crucified. His followers, the Christians, are claiming that he came back from the dead. You know as well as I that several traditional religions already made that claim about their gods; nothing new there. But this time it’s different: they say that they have actual eyewitnesses to this. It is your job to go out and interrogate these alleged witnesses and report back. And let's not forget about that member of this very cult who reported that dead and buried bodies came back to life and walked about town, even BEFORE this Jesus died! There are plenty of you, so do a thorough job and be sure you get all the details.”

A few weeks later, the investigators report back to the Chief Detective and Chief Magistrate regarding the alleged resurrection of Jesus, the Galilean.

Investigator No. 2: "My witness says it was still dark, that the stone had been removed, and she told Simon Peter."

No. 1: "Mary Magdalene told me, ‘they had taken the Lord out of the tomb, and we didn't know where they laid him.’ She claims she went to tell Simon Peter and the other disciples, and they looked inside and saw the body wrappings and then they went to their respective homes."

No.3: "But Mary stayed behind, and a man she thought at first was the gardener identified himself in some way, and he said, ‘Don't touch me.’ So, according to her, she went back and told the disciples, who were locked in the house..."

Chief Detective: "I thought she said originally that they went back to their respective homes?”

No. 4: "And my witness says that this Jesus came in, although the doors were locked."
Chief Detective: "Through the wall? I fail to understand why a body would need a stone rolled away from an entrance to a tomb if it could walk through walls."

No. 6: "My witnesses differ markedly from what we've heard so far. They say it was the mother of James, along with Joanna, Mary Magdalene, and some other women, who first went to the tomb that morning."

No.4: "I was told, for sure, that it was the mother of James, Mary Magdalene, and Salome."

No.5: "Well I was told that Mary Magdalene and the other Mary went to see the tomb, and an earthquake happened. Excuse me, but this reminds me of that other earthquake that guy reported, before those dead bodies allegedly rose from the dead. Anyway, they said the earthquake rolled away the stone, and someone sat on the stone, and the guards were terrified, but they stayed there."

No. 2: "My witness insists it was a young man sitting inside, on the right side."

No. 4: Oh no, my sources said TWO men were standing Inside."

No. 1: "My witnesses, who certainly appeared to be honest, said they saw 2 angels, clear as day, one on each end of the slab."

No. 6: "Well, the messengers - men or angels - to1d the women not to be afraid because Jesus had risen from the dead!"

No. 6: "As I was saying, before I was so rudely interrupted, these women either told no one about this, or they told ALL of Jesus' eleven disciples, according to my witnesses."

No. 2 "Now that that's cleared up . . . so, when Jesus' mother, Mary, came back from his tomb, she knew that Jesus had returned from the dead.”

No. 3: "Not really? My witness said Peter, and then to the twelve disciples."

No. 2: “But wasn’t Peter one of the twelve? And hadn’t Judas, one of the original twelve, killed himself prior to these events?"

No. 5: "My witnesses proclaimed that Jesus FIRST appeared to his disciples on a mountain in Galilee."

No. 3: "No, they absolutely confirmed Jerusalem."

No. 1: ". . . anyway, he just floated away, up into heaven, though some are not absolutely sure that happened."

No. 1: "Many worshiped him before he rose up, but some doubted.”

Chief Detective: "They still doubted? I must wonder why this Jesus did not appear to the whole of Jerusalem and leave no doubt at all about his return from the dead. Do you have any other testimonies of witnesses you have questioned?"

No. 2: "There was mention of a certain Paul of Tarsus, whom we have been unable to locate. It is said that he claims that 500 people saw this risen Jesus."

Chief Detective: "Five hundred! That's more like it. Why didn't they, or some of them, come forward?"

No. 3: "They offer no explanation, but all agree he never lies. Besides, he never actually met Jesus."

Chief Detective: "I can't get past one thing. Why did these people, who spent so much time with Jesus, not recognize him when they first saw him after this alleged resurrection? One has to wonder if it wasn’t really someone else. Moving on, I want to ask you why you didn't question the men who were guarding this tomb. Surely their testimonies would help clarify matters."

No. 1: "The answer I was given is that they are unavailable because they went to the chief priests and magistrates of the Jews, who paid them off to be silent about this resurrection they allegedly saw."

Chief Detective: "It's interesting that no one actually saw this body in the act of rising from the dead."

No. 1: "Well, the witnesses said that the guards were told to say that Jesus’ disciples came by night and stole him away while the guards were asleep."
Chief Detective: "Excuse me, but it seems very odd that soldiers would ever admit they were asleep on guard duty, which would be punishable. Besides, how could they know the disciples took the body if they were asleep when it happened? Anyway, do you have any more? Who is this man?"

Man: "My name is John, the beloved of Jesus, testifying to the truth. I have written of these things, and my testimony is true. You had better believe what you have heard is true; but more blessed will you be than the witnesses, if you believe WITHOUT seeing what we have."

Chief Magistrate (who until now has been silent): "Thank you, John, for appearing before us today. We will seriously consider all the evidence presented. But our position on truth may be different from yours, for we regard truth as being universally applicable to every culture. Two plus two equals the same everywhere, regardless of claims and ideologies to the contrary. I’m not sure you get this. Please understand our position. We endeavor to be fair to ALL beliefs. We need no further disruptions from cults following this Jesus, who has caused us enough trouble already. Do you have any further words for us?"

John: “Actually, all the testimony you have heard today was written by followers of the Lord. WE do not lie, and we OWN the TRUTH which the Lord has bequeathed to us. If you and those gathered here refuse to believe the evidence before you today, you will yourselves be judged and condemned to eternal punishment."

Chief Magistrate: "Thank you, John. You are excused now."

The Chief Magistrate and Chief Detective leave the room to discuss matters. In a short while they return.

Chief Magistrate: "We have reached a tentative conclusion. Please file your respective reports for the record and future reference. From what we have heard so far, we can only conclude that no one in his right mind is going to take this contrived, convoluted crap, seriously.”