God is Deaf, God Remains Deaf, and We Have Deafened Him 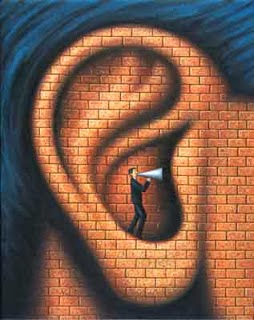 In 2004, the World Council of Churches (WCC) established the International Day of Prayer for Peace. Each year since, on the 21st day of September, the WCC issues a call for all people of faith to lift their voices to Heaven in a tsunami of supplication for peace. This day of mass prayer coincides with the United Nation's annual International Day of Peace established in 2002 to encourage all the world's combatants to stand down, at least for one day.

Every year since the first Peace Bell tolled in Jisenji-no-hana, Japan in 1947 in prayerful remembrance of the horror wrought by the Atomic Bomb, Peace Bells peal and citizens pray in many countries on various days of national commemoration. The United Nations Peace Bell, gifted by Japan in 1954, rings out every year on Earth Day, its bell-cord blessed and presented to the U.N. by Shinto priests in 1990.

Today, one can find on the Internet thousands of sites offering prayers for peace from individuals, to interreligious foundations, to large religious organizations.

These are certainly heartwarming displays of compassion for all humankind by tens of thousands, perhaps millions of good people from many religions around the globe, but are they effective?

The number of conflicts in the world at any given time varies depending on the criteria used for defining the nature of a conflict. WarsInTheWorld.com calculates the number of periodic border clashes, international shooting wars, and internal struggles. By their measure, as of November 13, 2013, there were 60 countries at war, among most of which 490 militia-guerrilla, separatist, and anarchic groups were engaged in internal conflicts.

HistoryToday.com uses a different scale to determine the number of international conflicts at a given time. They do not include internal struggles, but calculate only the number of pairs of countries (conflicts between states) engaged in hostile acts. Their definition of "conflict" includes all aggressive acts such as full-scale shooting wars, gunboat diplomacy (threat by show of strength), blockades, and border closings. By this method, they calculate that the rate of growth of conflicts in the world has increased significantly since the end of World War II in 1945. During the Cold War, the rate of growth was 31%, and during the 1990s, the rate of increase reached 36% per year.

Clearly, intercessory prayer is powerless in reducing the level of hostility in the world.

Attempts at direct mediation by religious organizations have been few in number and relatively ineffective. The United States Institute of Peace cites only two conflicts where mediation by religious groups brought about a cessation of fighting; the first Sudanese civil war of 1955-1972 during which two million people died, and the Mozambique civil war of 1975-1992 which resulted in one million deaths. Both conflicts displaced millions of individuals and families.

The Sudanese civil war erupted again in 1983. Mozambique still holds on to a shaky peace after the Renamo guerrilla leader, Afonso Dhlakama, declared an end to the 1992 peace accord on October 21, 2013. As of this writing, some fighting has occurred, but it was limited in scope.

Even though economic and social conditions have improved significantly in the country during the two decades, peace appears to be breaking down. As of November 10, 2013, foreigners were leaving the country and guerrilla fighting has begun in central Mozambique.

One might rightfully ask, then, is it even possible to achieve world peace and social harmony when mass prayer, and secular and religious intervention have brought about such dismal results? Is there no path to world peace?

There is a path, but to take it, we must shift our focus. This is not to say that religious and secular mediation attempts should not continue. Indeed, these are all we have. So, where is the path?

Yet, by nature, individuals are not given to harmonious relationships with everyone else. Because this fact was not lost on Socrates, he suggested that the rulers of society must propagate a religious, noble lie of such a nature that everyone would accept his god-given place in society and work in harmony with everyone else.

Socrates' approach has never worked. Governments are not composed of benevolent philosophers, relatively few citizens would dare to change their religious beliefs for any reason, and many citizens are not religious at all.

Additionally, most conflicts today have little to do with religion. The Sudanese and Mozambique civil wars are over oil and mineral rights. The true root cause of armed conflict, then, is greed and insensitivity葉he driving forces of economic disparity.

Currently, most of our efforts to bring about peace are reactive, and there seems to be no other way. I suggest that the proactive, long-term solution is to target the root cause. Concentrate on the children. Teach them, above all, one simple concept to which most people already agree but tend to ignore or forget.

Contrary to popular belief, "do unto others as you would have them do unto you" is not a concept owned by any religion. It is almost universal:

It is Baha'i: Ascribe not to any soul that which thou wouldst not have ascribed to thee, and say not that which thou doest not. . . Blessed is he who preferreth his brother before himself.
Haha'u'llah;

It is Buddhism: ...a state that is not pleasing or delightful to me, how could I inflict that upon another? Samyutta Nikaya v. 353;

It is Christianity: And as ye would that men should do to you, do ye also to them likewise.
Luke 6:31, King James Version;

It is Secular Humanism: Do unto others as you would have them do unto you;

It is Brahmanism: This is the sum of Dharma(duty): Do naught unto others which would cause you pain if done to you. Mahabharata, 5:1517;

It is Judaism: What is hateful to you, do not to your fellow man. This is the law: all the rest is commentary. Talmud, Shabbat 31a;

It is Confucianism: When one cultivates to the utmost the principles of his nature, and exercises them on the principle of reciprocity, he is not far from the path. What you do not like when done to yourself, do not do to others. Confucius, Doctrine of the Mean.

To be sure, benevolent reciprocity is a moral concept advocated by the sages, by many religions, and by atheists and agnostics. It is possibly the highest moral value ever espoused, and yet most who claim to adhere to this philosophy do not teach it as the principal value by which to guide our lives. If this were not so, then there would exist little or no poverty, little or no indifference, and there would be world peace as we put aside our divisive dogmas and self-interests for the sake of reason and empathy. Why would this not be something to which everyone, indeed, even our gods, would agree?

How hard can it be? Consider Matthew 25; the words attributed to Jesus that define how we should treat "the least of these." Matthew, or whoever wrote the Gospel of Matthew, in his quest to bring about a more just society did not suffer from any illusion that our actions are motivated by empathy. Self-interest is far stronger.

He knew that without threat of punishment relatively few would follow his words. Moreover, he knew that punishment in the form of execution, imprisonment, or flogging would not be enough. He knew the punishment must be far greater than anything dealt by society擁t had to be the threat of divine punishment: unrelenting torture, without end, forever.

Yet, even that threat has never been enough. Why has it not? Because we human beings are only somewhat less subject to our genetic heritage than other species. By nature, we are xenophobic, aggressive, self interested, territorial beings traits far more evident in some than in others.

These behaviors are characteristics honed by the drive for survival in a distant past far more dangerous than the present, when to lose one's territory and possessions was to lose one's family, one's life, or at the very least, create considerable hardships.

We now have the power to override our aggressive nature. With the evolution of self-consciousness and reason, what were once instincts have been reduced to impulses. We have become, collectively, more tolerant and less territorial.

We have intellectualized our territorialism in the form of religious and political doctrine, property possession, and sovereignty by force of law. Yet, even though our sense of human fellowship is still evolving, we have already gained the capacity to follow the path of the sages, difficult as that may be.

The first step to peace, then, is dependent on individuals adopting the concept of benevolent reciprocity as their primary social value, and teaching it by word and example, concentrating on the children. Teach them early and well. Immerse them in other cultures and religions. Show them the ravages of abject poverty among societies of the world, including our own. Endow them with the understanding they will need for universal empathy. Make this teaching the highest of society's priorities.

It will take scores of decades, but if that first step is successful, then far down the path we will see nations putting an end to economic oppression, to poverty, and to ignorance the main causes of internal unrest adopting a policy of aggressive benevolence; returning kindness for belligerence short of armed aggression.

I can envision a future, not in my lifetime but long thereafter, when humankind will live together in peace. I can see a time when our primary motivation will not be self-interest and profit, but universal empathy. The founders of that future are those who listen to the sages and have the courage to venture beyond the walls of their theological, territorial, and self-centered ideologies, taking with them only the greatest words of wisdom to do unto others as you would have them do unto you.